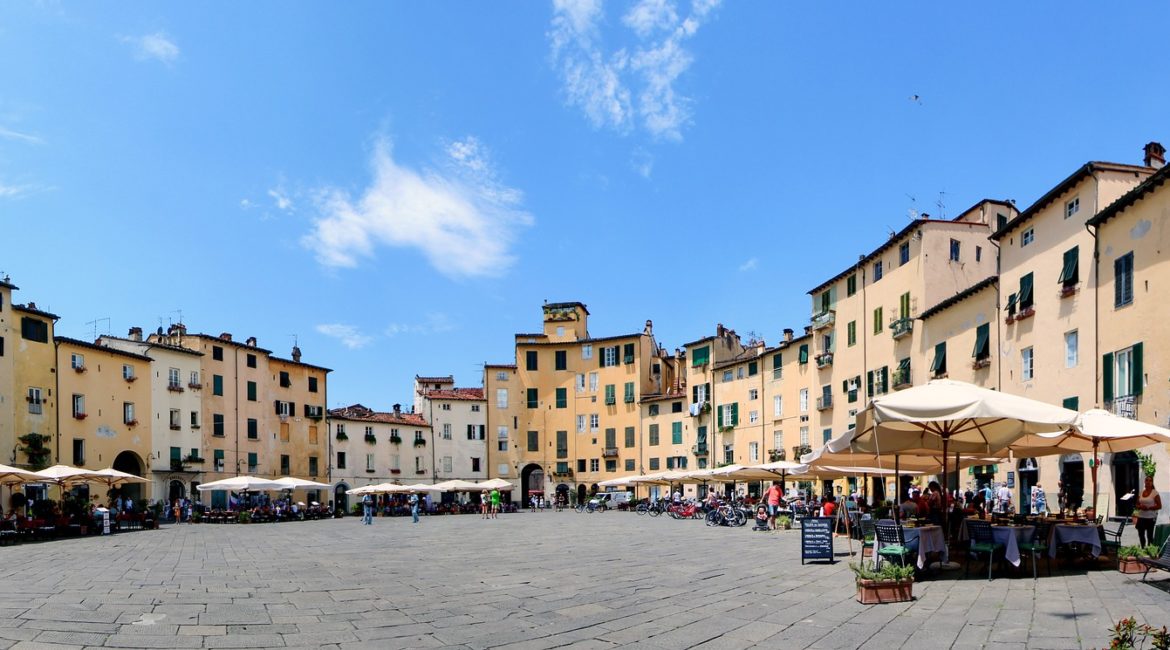 Many people born and bred in Tuscany consider Lucca an outlier—it’s not uncommon to hear Florentines mutter “that’s not Tuscan”, probably when referring to the bread, which is salted in Lucca and strictly plain elsewhere in Tuscany; or to the Lucchese people’s mode of speaking (unique, to say the least); or to the fact that Lucca is the region’s only city-state to have preserved its independence until 1847. (That last bit could partially explain the other two). But Lucca’s unique historic circumstances made it into a majestic fortified island, home to a kaleidoscope of all the best things in Tuscany, despite any claims to the contrary.

Tourists see a manifestation of just how jealously Lucca guarded its independence immediately upon arrival: its magnificent and still-in-tact circular wall (16th-17th century). Over its 4 kilometers, there are a solid 10 baluards, a platform and stables, which still make a great starting point for discovering the city even today.

Throughout this medieval city you’ll find monuments representing all the various historical epochs Lucca has lived through, beginning with a Roman amphitheatre – today piazza dell’Anfiteatro – a circular, striking space which came out of the ruins of ancient bleachers, through the work of architect Lorenzo Nottolini. Weaving your way through the centuries and styles, you’ll reach the Medieval era, and Lucca’s true treasures. Its nickname of the “city of 100 churches” is hardly random – the city has an incredible collection of houses of worship, beginning with the Cathedral of Saint Martin (Duomo di San Martino), where the Romanesque-Pisan façade is filled with mysterious and obscure symbols, resembling a beautiful labyrinth. In the Cathedral you’ll find the Volto Santo and the amazing tomb of Ilaria del Carretto sculpted by Jacopo della Quercia. Wandering through the streets, you’ll come upon the lovely, clean façade of the Basilica of San Frediano, and further the square and church of San Michele; attempting to guess the Italian Risorgimento heroes (such as Giuseppe Garibaldi) depicted on the capitals of the Romanesque façade, restored in the 1800s, makes a fun game.

But as you move through Lucca, you’ll discover much more than just churches. At the top of a tower (the Guinigi is its name) you’ll be wowed by a garden packed with trees – yes, it’s open, and you can go up. Getting lost is impossible, really, but great fun in the tight via Fillungo, where you’ll find the city’s chicest shops; or in the rooms of the Ducal Palace in Piazza Napoleone (one of the last remaining testaments to the Principality of Lucca’s existence); or, adventuring outside the walls, in the lovely neighborhood of Liberty villas that surrounds the city center.

Perhaps due to the fact that its packed medieval center is still nearly all intact, Lucca has become a genuinely fantastical setting. Throughout the city streets every October, Lucca Comics & Games takes place – it’s a festival that turns the old walls and narrow streets into a full-color carnival outside the usual Carnival season in Venice and elsewhere. You’ll witness an “invasion” of aliens, mutants, cartoon characters, medieval knights and anything that a cosplayer can come up with to impersonate.

In the last few years, the city has become an important summertime destination for music due to the Lucca Summer Festival, which features some of the most noted artists on the international scene.