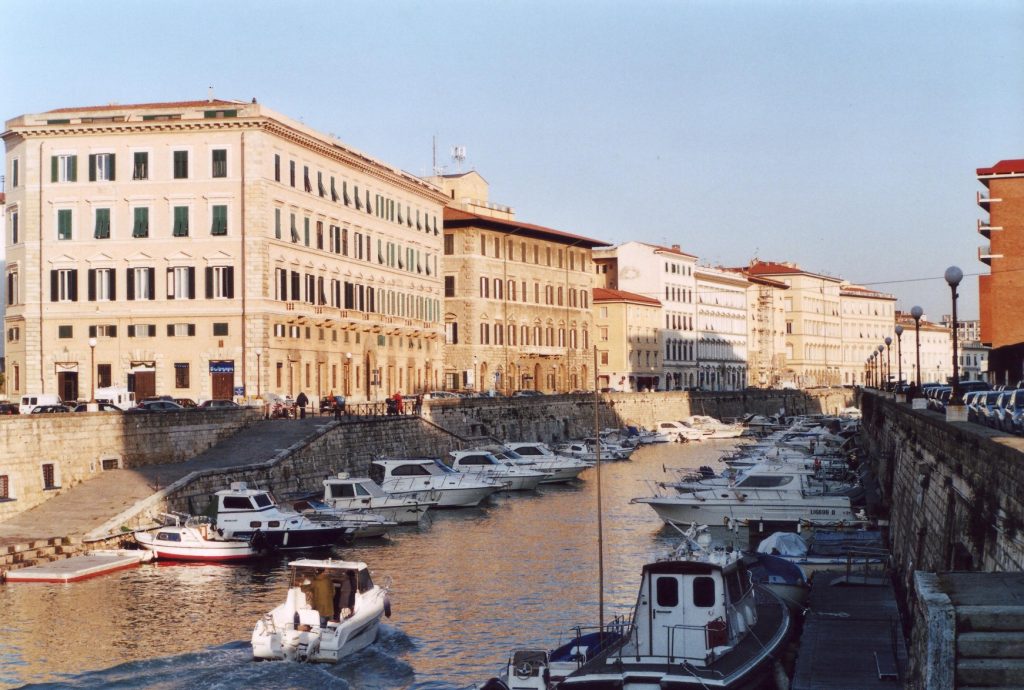 One of the most iconic images of Livorno is the Terrazza Mascagni, a quasi-infinite structure with a stunning view over the sea. But Livorno is more than just a beach town—it’s a busy port city and has been since the second half of the 16th century, when the powers-that-were decided to transform this fishermen’s village, built around the Tower of Matilda of Tuscany, into one of Europe’s main ports—largely for the military and commercial purposes of the Medici. While it’s now well-known all throughout the Mediterranean, the port developed over time thanks to contributions from various cultures—the “Nations of Livorno”, one might call them. You can still find traces of these “Nations” in the city’s houses of worship, cemeteries, archives and gastronomic traditions.

Skimmed as it is by the sea—which, through various canals, ripples into the oldest neighborhoods of the city—Livorno has the unique charm of a Tuscan city with a Mediterranean vibe. Its history, culture, flaming sunsets, clear, scented air, nautical sports and food traditions all circle back to the sea. Europe’s very first beachfront bathing establishments appeared here in the 19th century, and along with those came the very idea of a “nautical” vacation.

To best explore the birth city of Pitro Mascagni, Giovanni Fatori, Amedeo Modigliani and Giorgio Caproni, follow the inspiration that its various locations, sounds and colors create. One of the most intriguing routes to take will bring you through an area that many call “piccolo Venezia”, or little Venice, a route of canals to traverse via boat, which leads to some of the Renaissance structures and areas in the center of the city. Then there’s the Giovanni Fattori Civic Museum, where you can admire works by 19th and early 20th century Tuscan painters; plus the Mascagnano Museum, dedicated to music and housed in the historic Teatro Goldoni. Don’t miss the chance to explore those previously mentioned “Nations” that populated Livorno, beginning with the “Yeshivà Marini” Jewish Museum in the San Ranieri Oratory, followed by the Museo di Santa Giulia, housed in the Chiesa degli Armeni. Anyone wanting to explore the sea treasures shouldn’t skip a visit to the Mediterranean Museum of Natural History at Villa Henderson, which combines old relics and finds with a super-modern educational track through the museum. Then, see living examples of Mediterranean fauna in the tanks at the Diacinto Cestoni Aquarium.

You can call it a day after a stroll through the Liberty style villas and eclectic structures in the Ardenza neighborhood, which is just behind the seafront. This is the perfect jumping off point to try some of the delicious culinary treats of the city, beginning with cinque e cinque con le melanzane, a traditional Livornese sandwich with chickpeas and added eggplant, and followed by cacciucco, a fish soup, and an ample offering of seafood and shellfish to try—you’re just off the beach, after all.