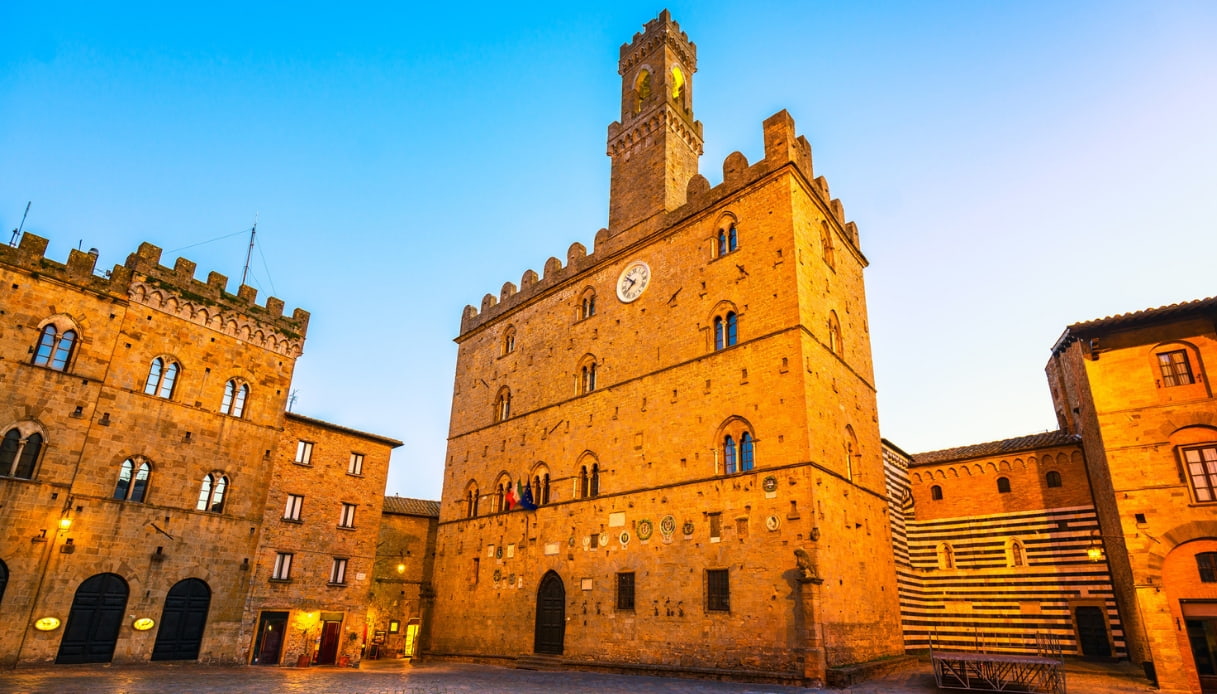 Volterra has an unmistakable Medieval character, where the atmosphere of an ancient village can still be felt and whose authenticity is protected by the relative isolation that has limited the development of the city center in the industrial era, safeguarding the city from urban speculation.

History has continually left its mark on Volterra, from the Etruscan period to the 19th century: the city is a treasure trove of artistic heritage, which can be admired as you walk through the streets of the historic city center and visit the local museums, like the Etruscan Museum, the Pinacoteca, the Museum of Sacred Art or the Alabaster Ecomuseum. And the beauty continues just outside the historic center, where you can enjoy the splendid

Roman Theatre and the ruins of the Etruscan Acropolis. While you’re out here, make sure to take in the surrounding landscape, uncontaminated by time, before heading off to discover the secrets of a rare artisan product: alabaster.

Modern Volterra is almost totally enclosed by the 13th-century city walls, the result of an urban expansion that, beginning around the year 1000, was finally finished nearly 300 years after the construction of the defence systems around the city’s ports. In that period, Volterra grew from the castrensial form of late-Antiquity (5th century), extending to its current boundaries. The center developed around the ancient church of Santa Maria (the current cathedral) and the neighbouring pratus episcopatus, today piazza dei Priori, while beyond the castrum or castellum, the villages of Santa Maria and Abate sprang up.

As you stroll through Volterra, you’re sure to notice the curious Incrociate, that is, impressive groups of towers that constitute a tangible sign of urban development to the east, west and north: they are the crux viarum of Buomparenti, Sant’Angolo and Baldinotti. Throughout the 1200s, on the pratus episcopatus, not only was the domus comunis (Palazzo dei Priori, from 1208) built alongside the Cathedral’s apses, but the features of the namesake piazza took form and the height of the towers were redrawn according to the different quarters of the city. Aligned with Palazzo dei Priori, piazza San Giovanni was built to serve a typical Tuscan function, that is, to be the location of all the most important ecclesiastical buildings: the Cathedral, the Baptistery, the headquarters of the Opera, the Hospital of Santa Maria and the cemetery.

As previously mentioned, the Medieval walls surrounded almost the entire city until a few years ago. The four Medieval hamlets link together in the center via uphill streets. The hamlets are: San Alessandro, on via delle Saline, on the side of the Val di Cecina, San Lazzero, on the road to Florence and Siena, Santo Stefano and San Giusto, the furthest from the city, near the Balze and dominated over by the mighty church dedicated to the patron saint.

In the late-19th/early-20th century, the large Psychiatric Hospital complex was built in San Lazzero, transformed today into a modern hospital, where the eclectic early-20th century architecture blends with the Rationalist style. Also around San Lazzero, the old railway station from 1912 can be seen, which connected the city of Saline with bold scaffolding.